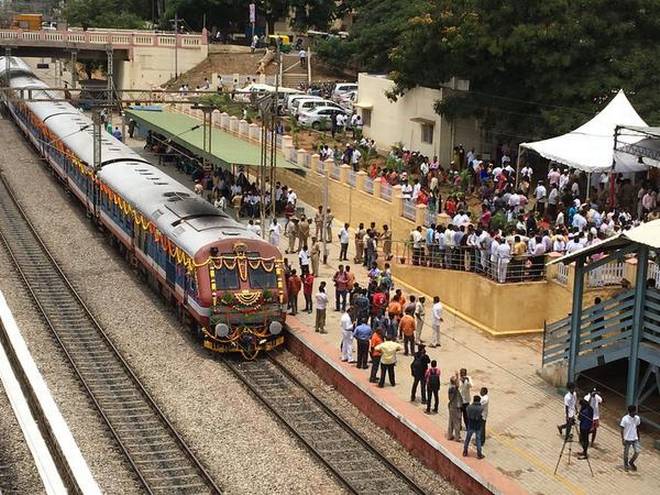 Whitefield in Bengaluru is a hotspot for real estate investments. While the Namma Metro is expected to ease out some of the traffic woes in the area, the city’s Central Lok Sabha member P C Mohan believes it is not enough. Hence, he has requested the Railways to introduce suburban trains between Whitefield and Cantonment. He has also sought for stoppage of trains at Mahadevapura, which is near the Krishnarajapuram diesel loco shed. Mr. Mohan has written to R S Saxena, the Divisional Railway Manager, on the same.

He has asked for the two DEMU trains that have arrived in Bengaluru Division to be put into service without delay for better connectivity. Moreover, he wants the trains to run more services during the peak hours. Mr. Mohan said that he can easily release funds from the MPLADs to make platforms 1A, 1B, 3 and 4 at Cantonment station usable for suburban services. Mainline electric multiple units (MEMU) trains do not require reversing at terminal stations and they are a vital part of the suburban rail service.

“Two new MEMUs have arrived in Bengaluru Division and (I) demand that they be pressed into service immediately to enhance connectivity and run more services, especially during peak hours … The single trip run between Byappanahalli and Whitefield at present is not enough to meet demands of commuters. I pressed the DRM to run two more trains on the route,” Mr. Mohan told Deccan Herald.”

Dedicated services have affected suburban rail ridership, which is seeing a steady increase. Earlier, Hoodi was the only halt station. The MP’s letter also provides a list of trains that have a demand for stoppage. Mahadevapura already has the necessary infrastructure for stoppage of trains. Mr. Mohan said that the number of suburban commuters is increasing fast. Hence, work should speed up without further delay. He has also asked for clarification on building the foot over bridge (FoB) at Hoodi railway station for which had had sanctioned INR 1.1 crores.

“The Bengaluru Urban DC office has already a issued a cheque for Rs 83 lakh on February 28, 2017. However, I am pained to note that the railways have not started the work,” stated Mr. Mohan.